Years ago whilst in prayer I was asking in faith that God cast His net out over the nations to bring in the harvest of souls when He spoke to me….

He said,”The enemy also has a net.”

At that time God showed me things pertaining to the enemies net and I was directed to move location to be with another prophet 1200km to the north at Carnarvon. It turned out that the Lord had showed him exactly what I had seen and heard to do with the enemies net across Australia. For several months in 1996 we were engaged in intense warfare regarding the access the enemy had via ley-lines entering into Australia. I only know what He has revealed to me….I don’t want to know any more than that! But those Ley lines of power around the globe are a part of the enemies net around the whole planet and give access to his servants into Nations and cities and into the earth itself.

Thousands of those satellites are for tracking us and also for harming us via directed energy weapons and now 5G transmitters which also can act as a weapon when tuned up to high frequencies. How are we to be protected from the onslaught of frequencies aimed at us. The Word of God offers us much encouragement in this regard. The passage below is referring to Jerusalem, but as we are the true Jews and Jerusalem from above is our true mother then we can use this passage for us the body of Jesus Christ.

Isa 4:4  When the Lord shall have washed away the filth of the daughters of Zion, and shall have purged the blood of Jerusalem from the midst thereof by the spirit of judgment, and by the spirit of burning.
Isa 4:5  And the LORD will create upon every dwelling place of mount Zion, and upon her assemblies, a cloud and smoke by day, and the shining of a flaming fire by night: for upon all the glory shall be a defence.
Isa 4:6  And there shall be a tabernacle for a shadow in the daytime from the heat, and for a place of refuge, and for a covert from storm and from rain.

Isa 25:7  And He will destroy on this mountain The surface of the covering cast over all people, And the veil that is spread over all nations.
Isa 25:8  He will swallow up death forever, And the Lord GOD will wipe away tears from all faces; The rebuke of His people He will take away from all the earth; For the LORD has spoken.

God tells us that upon all the glory shall be a defence…..and also there shall be a tabernacle for a shadow in the daytime and a covert from storm and rain. Let’s take a closer look at this .

Verse 5 says a defence shall be over the glory. It  is the Hebrew word chûppâh khoop-paw’ From H2645; a canopy: – chamber, closet, defence.

Jewish couples are married under a chuppah חֻפָּה  — According to Strong it is a CANOPY, CHAMBER CLOSET OR DEFENCE.

Yesterday I wrote about the Father’s EMBRACE

The chuppah is a type of His embrace where He incases us inside of His Tabernacle—inside the HOLY OF HOLIES—INSIDE OUR HEARTS—INSIDE OF JESUS HEART—INSIDE OF FATHERS HEART. For that is where we are abiding -IN(SIDE) CHRIST JESUS. He then is our CHUPPAH–Our covering…we are incased in Him in Father….we are under His ceiling….we are in His CHAMBER under His canopy…in His tent….in His Tabernacle….in our heart.

This is awesome protection–being in the Tabernacle of God. Just so you know what I am saying….You ARE THE TABERNACLE OF GOD!! YOU ARE THE DWELLING PLACE OF GOD. Jesus fills you FULL and COMPLETELY WITH HIMSELF…ALL OF HIMSELF!! Christ in you–the hope of glory. And over the glory- which IS CHRIST INSIDE YOU-GOD PLACES A CHUPPAH or a covering to shelter you from the sun and the storm and the rain.

And there shall be a TABERNACLE or PAVILION for shade….

David also wrote of this Pavilion….

Oh how prophetic and how marvelous is that word from David?! In our day when the enemy is seeking to harm people with microwaves aimed at us from above God says in the time of trouble HE SHALL HIDE ME IN HIS PAVILION!! In the SECRET PLACE of HIS TABERNACLE HE SHALL HIDE ME!! HE SHALL SET ME HIGH UPON A ROCK. This Pavilion that Father places over all the glory, this chuppah, gives us protection from whatever the enemy aims at us.

God says He shall HIDE ME.…The word means  to hide (by covering over); by implication to hoard or reserve;

So in God’s hiding place there are also reserves and provision which is hoarded up. God shall provide for you in the Pavilion just as He provided for and hid Elijah at the Brook Cherith. And the word for Pavilion in Hebrew here in Psalm 27 is sôk…It means a hut (as of entwined boughs); also a lair: – covert, den, pavilion, tabernacle and it comes from a root word meaning to entwine as a screen; by implication to fence in, cover over, (figuratively) protect: – cover, defence, defend, hedge in, join together, set, shut up.

Now I have read that Nikola Tesla found a way to protect anything from incoming attacks of whatever nature. A kind of force field. It is possible to spread that force field over a jet, a warship, a city, even a nation! No missile can penetrate it. 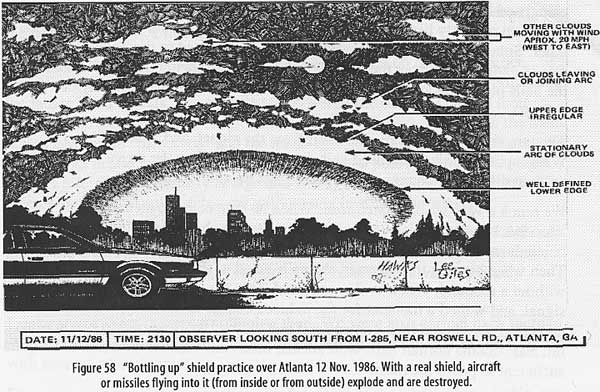 What Tesla discovered and made possible is not something knew. God is the Creator not Tesla. God says

He “…will create upon every dwelling place of mount Zion, and upon her assemblies, a cloud and smoke by day, and the shining of a flaming fire by night: for upon all the glory shall be a defence. Isa 4:5

The Cloud and smoke and the shining flame are the very symbols of His presence- known as the Shekinah Glory of God. But dear believer—you and I are seated above the mercy seat inside Jesus our High Priest. We are seated above the blood on the lid of the Ark….under the wings of the cherubim….and the very point of the shining flame of God’s presence and energy is coming always into our heart. From our hearts this flame of fire pours forth in gushing rivers of living water. His fire and cloud and presence are all with US!! IN US….AROUND US…..OVER US….UNDER US….and THROUGH US!!

The Lord is also A Covert for us—It is the word mistôr From H5641; a refuge: – covert. H5641- sâthar A primitive root; to hide (by covering), literally or figuratively: – be absent, keep close, conceal, hide (self), (keep) secret, X surely.

As we saw yesterday the Lord EMBRACES us –that is He enfolds us within HIMSELF. He hides us in the secret place —in Himself. The Lord hides us for His glory….He protects and has erected a pavilion over us–a chuppah…a tabernacle….He secrets us away from the plots of man…even 21st century man….Even in the strong city we are blessed and protected. Blessed shall you be in the city and in the country! We read about the mighty weapons of the enemy and say in haste I am cut off from before Your eyes O God!! But God PRESERVES US AND KEEPS US for a salvation ready to be revealed in the last time.

Psa 31:20  You shall hide them in the secret place of Your presence From the plots of man; You shall keep them secretly in a pavilion From the strife of tongues.
Psa 31:21  Blessed be the LORD, For He has shown me His marvelous kindness in a strong city!
Psa 31:22  For I said in my haste, “I am cut off from before Your eyes”; Nevertheless You heard the voice of my supplications When I cried out to You.
Psa 31:23  Oh, love the LORD, all you His saints! For the LORD preserves the faithful, And fully repays the proud person.
Psa 31:24  Be of good courage, And He shall strengthen your heart, All you who hope in the LORD.

God also says in Isa 25:7  And He will destroy on this mountain The surface of the covering cast over all people, And the veil that is spread over all nations.

The word covering is lôṭ
lote
From H3874; a veil: – covering. It is only used one time. It comes from the root word lûṭ
loot
A primitive root; to wrap up: – cast, wrap.

and he will destroy the veil that is spread over all the nations.

The veil is massêkâh
mas-say-kaw’
From H5258; properly a pouring over, that is, fusion of metal (especially a cast image); by implication a libation, that is, league; concretely a coverlet (as if poured out): – covering, molten (image), vail.

The veil is spread over the nations

A primitive root (probably identical with H5258 through the idea of fusion); to interweave, that is, (figuratively) to overspread: – that is spread.

These are days when Satan has NO MORE PLACE IN THE HEAVENS for He has been defeated and cast to the earth—only to now try to rule the earth as a “man” —something he can never be. He would be God, but he is only an angel. Mankind is made in the image and likeness of God…  ANGELS ARE NOT!

So we see that God protects us from the wrath of the enemy hiding us and covering us in Himself……and also destroying the false image and it’s false god and setting the nations free from the hupnos—the hypnotic trance they are brought into through these soon to be activated 5G weapons. The frequencies aimed at the minds of the nations will make them easy targets for the son of perdition. But for those who know Jesus Christ and who have been embraced by Father enfolded inside His very heart–we are being preserved and kept for the day when all the families of the nations shall remember and turn and worship the LORD JESUS.

Why people believe the lie and reject the truth

Tue Apr 7 , 2020
The news video shows a respiratory nurse attending to a patient on a ventilator, but the patient is actually a dummy and not a human […]

The grace of our God

Have you been told today?

Jesus is for you

The reason why Russia went into Ukraine

God can take you through the sea

All saved so as through fire